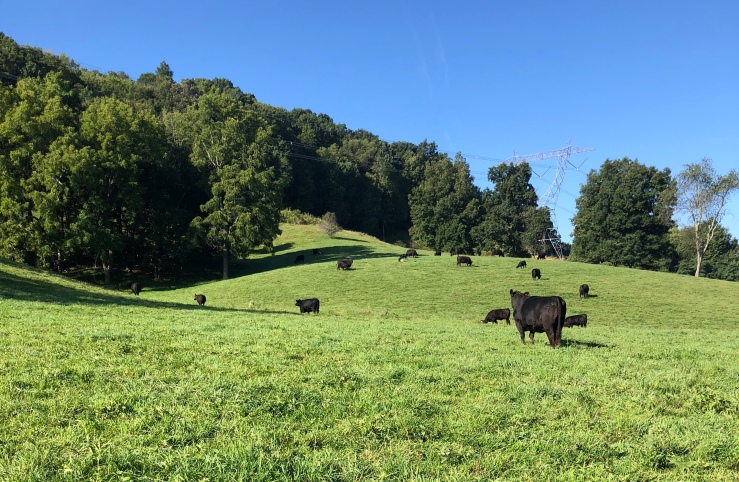 Yesterday I posted a funny poem about our unfortunate “date night” – since that’s about how steamy we’ve been here lately – spent in the bathroom warming up a very cold newborn calf. It got some giggles, some shares, and some likes. It’s been making its way across the country through Facebook, which is admittedly kind of cool – that one sleep-deprived poem would make its way into the eyes of cattlemen from across the country.

It got quite a few comments, one from Hubs friend who said he no-longer thought of Hubs as a KMart Cowboy hahaha…I guess he’s the real deal now! One person thought I should turn it into a children’s book – which probably means I should take the “pissed” and “hell” out…

And it got one comment from a person in Montana.

This individual read my silly poem and agreed we must be good, hard-working people – but then she made two crucial assumptions that just weren’t true. And that’s why I hope, as my “ag” friends, you’ll share this post.

She assumed we chose to calve in the Winter.

She assumed we live in Montana (because the person who shared it does).

She went on to criticize cattle producers who want accolades on social media for pulling a calf out of a snow bank, but that technically made the choice to calve in the winter. She believes that calving seasons should be moved to a more ideal time. She clearly made some assumptions in regards to us.

Sayings of the South #2 – “Opinions are like a-holes – everybody’s got one.” True story.

Admittedly, this is how I perceived her comments. But see, that’s the bad thing about written language. One sentence, one comment, one blog post can be perceived by individuals in more than one way. And this is what I think she’s missing out on.

We calve mid-March through mid-May, most coming in April. We have a tight window of calving. We live in Virginia. It will be 70 degrees this weekend. And while we’ve had some cold weather this week, and we might get a squall of snow between now and April – it’s definitely not winter. So her assumptions were false.

I commented back explaining our situation, the assumptions she had made (politely), and that I was commenting because I didn’t want people to only read her comment without knowing the truth.

She responded, acknowledging her faulty assumptions, but stood by her claim that people in her area shouldn’t be calving during winter months, unless there’s a very valid circumstance. Her rationale seems reasonable. But here’s the problem. There were other comments regarding why calving happens during winter months that also seem quite reasonable. And that’s the thing about agriculture…

Sayings of the South #3: “There’s more than one way to skin a cat!” PLEASE nobody get offended and think I think we should be eating domesticated animals. It’s just a saying!!! But it’s true – there’s more than one good way to do something in farming and ranching. And that’s ok.

So here’s why I’m posting this – and I’m hoping you will too.

One individual posted one negative comment about us rescuing a cold calf. She’s a person from the agriculture industry, someone who should “get it”.

ANYBODY could read her statement – and I do mean ANYBODY. Left alone, it leaves my husband and I looking like attention seeking, irresponsible cattlemen. With context, and an explanation, it leaves her looking like a person who complains, and makes negative comments without doing her homework. And at the end of the day, someone in the agriculture industry still looks bad. Which nobody wants.

Sayings of the South #4: “Don’t air your dirty laundry outside.” Nobody wants to see the skid marks in your undies. Promise. Meaning? If you don’t have something positive to say, Facebook might not be the place to air it.

So here’s my ask, farming/ranching folks:

Can we please make social media a place of positivity when it comes to agriculture. Where we showcase what we’re proud of. Where we show the hard work that we put in. Where we stay in our own lane, and agree not to tear down someone who does it differently than us. So that together, we combat the people who have NO clue what they’re talking about, have never stepped foot on a farm, but have buttholes (See Sayings of the South #2).

My husband and I agreed before our kid was born – no disagreeing in front of Munchkin. No “airing our dirty laundry”. Why? Because it creates a divisive nature which is helpful to nobody, and in the end it would be all of us that lose. Especially our kid – or in the case of agriculture…the consumer. Because if the people within agriculture can’t publicly agree how to handle something – how in the heck do we expect a consumer to figure it out?

So as an industry this is what I want your take-away to be:

Social media is a powerful tool. It allows us to tell our story, to show off our farms, and to combat those that know very little, but have big opinions about how farming and ranching should be done.

It’s ok to disagree amongst ourselves.

Save it for a producer meeting. A Farm Bureau meeting. A one-on-one with local veterinarians and extension staff. Save it for the person you disagree with. Don’t air your dirty laundry because in the end – we all lose. Somebody looks bad, and that means we all look bad. We look divided – not united. And last I checked, we’ve gotten a whole lot more done as an industry, than a single person ever has.

PS – for those of you interested, I would encourage you to reach out to your state and local farm bureau organizations to see what media training resources might be available to help you navigate social media and AGvocacy.

Hey, everyone! I’m a born and raised farm girl who married into another farming family. I love tractors and heels, cows and a great black dress, raking hay and cooking big meals! I’m a wife to my hubs and Momma to my munchkin. View all posts by farminginstilletos

1 thought on “Being an AGvocate”